Twice around Èze to find nothing but Grasse 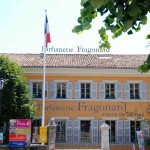 In a magazine back in Germany we read about a camping site that’s a bit in the wild and has famous view on Monte Carlo. In the article a picture was shown with two campers, a tent and a very spectacular view. It just mentioned “camping site south of Èze”. That didn’t sound so bad at all after spending a night at the not so satisfying Camping Magali.

We reached Èze easily and the navigation led us into the village. Now, we’re talking lots of winding roads, bends and heavy inclines in this area of France in general. But the way down into Èze was really steep. After reaching the centre, we neither discovered the mysterious camping site nor were we able to park. So, we tried the other direction of the village – and again lots of winding roads but no camping.

We checked our navigation and noticed we had made a mistake. So now, from the other side of the village, another try for the site. It looked very good, we were getting closer and closer, that’s the cool thing about navigation instruments. Like in some old-school James Bond movie you can trace this moving dot while moving yourself – awesome. However, we took another wrong turn and ended up on the way to some national park, which was surely were nice but not what we wanted.

So, another u-turn later (by the way always fun with an almost 6 meter / 7 yards vehicle in the woods) we were finally on THAT road leading us to the camping site. We saw it on the instruments…300 m…200 m…100 m…ok it must be right here…0 m…nothing. We found – nothing. 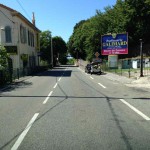 After this disappointment we had to recover a bit but then went on straight to Grasse. Some of the book worms might know this from the book “The Perfume”, at least my brother knew right away when I mentioned it. I’m not sure if the movie was shot there as well, I have to research it.

Grasse is a very neat village with many nice little stores. The main attraction are the perfume makers like Fragonard and Galinard. At Fragonard, you can mix up your own perfume and buy exclusive clothes and accessories sold only in the region – I have to verify whether this is a marketing trick ;) At the counter, the personnel will even speak to you in different languages. 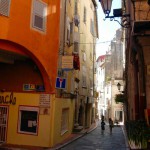 Leaving Grasse towards Castellane was the plan afterwards. We started taking one of the winding roads out but got a bit lost. Then, it was my fault I have to admit, I turned because I had the right feeling. Wrong. The biggest challenge so far began. We just ended up in a residential area, the roads were tiny and the space limited. How to do a u-turn now?!? After stopping and examining the situation we noticed a steep entrance that led up to a quite open area. We headed towards it and slowly and started the incline but then stopped because we had worries we would hit the ground with back part of the camper. There we stood – in the middle of a road and a steep entrance not knowing what to do.

A good 15 minutes we assessed what the next move would be in about 31° sun. Back out? Wiggle our way back somehow? In one swift move up with eyes closed?

A man came closer and first I thought he wanted to help but he just wanted to go somewhere with his car. I briefly explained the situation but he didn’t seem all that interested and jumped into his seat. However, he could not start his car, it seemed dead. He asked as for help, which was a bit absurd as we were kind of in need of help. So, we switched our mind for a few seconds and pushed his car so he could leave. However, that didn’t work out, his car was truly dead. 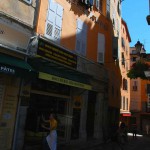 He vanished, but then a woman appeared on a window. I again explained the situation – she smiled and said “yes, it happens all the time here”. That kind of calmed me down a bit but didn’t solve the situation. She added that she’d come down and help us and then lead us to the right road.

So, back in the right mind set and alongside with moral, French support I decided for option C – the swift one. In one focused move I led the camper up to the free area with no ground touched! Yippie-ka-yeah, motherfucker. The sweet lady then really led us out of the area towards the right road – merci beaucoup! 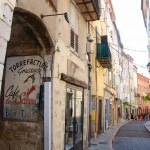 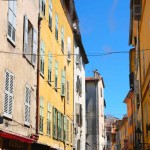 Water being sprayed in the streets 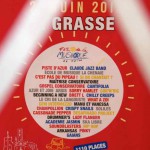 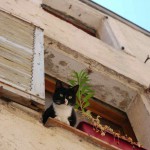 Who you lookin’ at?