Riding and surfing through Aquitaine 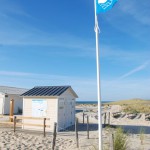 After surfing in Portugal and Zarautz, we also wanted to give it a try in the Aquitaine region in France, as we heard so much about it. Endless beaches with fine sand and great, wild waves. The first impression I had: I just love the sound of the city names. Biarritz! Bayonne! Biscarosse! Bordeaux! Those are the four Bs in the region, and along in the mix names like Seignosse, Mimizan, Lacanau Océan.

The beaches along this part of the coast are very similar when looking at them just from a general standpoint. Typically, when you approach a spot, there’s a dune. Behind it, you find a beach about 50 to 100 meters wide, depending on the tide. It’s somewhat difficult to measure the length of the beaches, they just seem to go endless in either directions. Most certainly, the surf conditions differ on each spot, but my surf and tidal knowledge is too amateurish to really make a statement.

We first surfed at Les Bourdaines in Seignosse. That day, the conditions were really good, both for beginners and advanced surfers. There’s a little shack with a surf school where we rented some boards. The surf was good, but somehow, we felt the spot was a bit plain.

The next day, we picked Mimizan Plage, also because there’s a really nice caravan parking right by the beach. We rented some boards from La Garluche and enjoyed some nice morning waves on the northern part of the village. We liked this spot a bit more because it had a bit better infrastructure, especially for campers.

On the following day, the surf fate led us to Biscarosse Plage. We rode our camper all the way to the front road on the beach to check it out. During this time of year (late September) the village seemed quite empty the tourist density was declining, of course. Again, we rented some boards, this time from Yann at Point Break. He was really friendly and gave us all kinds of tips along with the boards. The surf was ok that day, but the conditions for beginners were a bit difficult as the waves were coming in very irregularly. We liked Biscarosse very much, especially the many surf shops to check out some gear or just browse around. The beach is great, only showers are missing.

We spent the final two days of surfing on this trip at Lacanau Océan. I can’t say anything about the village, because we didn’t visit it. However, for campers it’s awesome this time of year! The 5-star camp site Les Grand Pins charges only 20 € per night while it asks for a whopping 53 € in the high season of July and August! It’s located right by the beach with a private entrance shorting the way you need to walk. So, with this bargain, the surf turned out to be double fun.

There’s Bo and Co surf school on the camp site, but it was already closed. However, at two other spots you can rent boards: Big Mama Surf Shop and Bo and Co shack on the way to the beach. Compared to other spots, the walk to the beach is a bit longer, but well worth it. There are showers and toilets at the beach. For beginners, the surf was really good in the late morning on the southern part of that beach. That always depends on daily conditions, of course. Of all places in Aquitaine, we liked Lacanau the most! 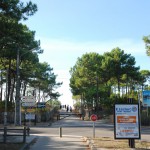 View to the beach path from the street 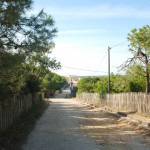 Path to the beach 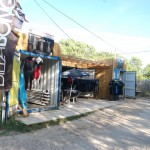 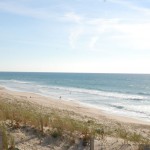 Look to the southern part of the beach 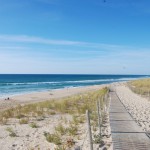 Look to the northern part of the beach 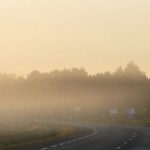