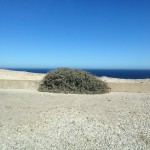 Sagres is wild, man. Rough and wild. Let’s begin. Portugal has two geographic records: Cabo da Roca is the westernmost (never had to use this word before, I admit) point in Europe. And Sagres, actually, Cabo de São Vicente, is the southwesternmost. Not surprising – both points feature a real nice red & white lighthouse. The image you see here is the southwesternmost bush in Europe ;)

After catching some waves in the West Algarve, the goal in Sagres was Praia do Beliche, as we were looking for a good surfing location paired with a parking space where we could spend the night with the camper. Technically, wild camping is forbidden in Portugal. One guy claimed a law exists in Portugal that it is not allowed to camp closer than 250 meters to the beach, which I find hard to believe. I have the impression that wild camping is tolerated but if you’re unlucky, you might end up with a fine, possibly a hefty one, especially in the high season. 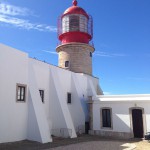 We decided to wild camp anyhow. Driving towards the parking space at Praia do Beliche was already a, let’s say, interesting event. The road passes through Sagres and then we headed down a long, straight, wild road. I already felt the hard wind at the steering wheel as I was preventing a sideways drift. The parking space is located right by a cliff below which the Beliche beach is located. When we arrived only two spots were open and we chose the one right by the cliff, nose first as we wanted to enjoy the spectacular view.

This plan worked fine while we had daylight. But as the night began, the wind began to blow and the location started creeping into our minds. You have to use a bit of imagination now: it’s dark, the light beam of the lighthouse of Cabo de São Vicente periodically sends some light beams, the wind is blowing strong from behind the vehicle – and there you lie in your camper bed, facing a cliff. The human mind is a miraculous thing and mine worked like so: 99% of my mind scientifically assured me “look man, the vehicle weighs a good 3 tons, your gear is set, the handbrake is on, you’re five meters from the cliff, three other campers are in a similar spot, nothing to worry about…just go to sleep.”. However, 1% of my mind whispered to me “hmm, this doesn’t feel right, the other campers are just there because you’re there, what if you start rolling in the middle of the night and then…you don’t feel it or you react to late…you gonna have one hell of a death!”. For two hours, we tried to sleep, but were basically wide awake with our minds working. 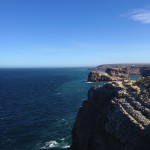 Then, out of nowhere, we hear the engine of one of our neighboring campers – they back away and then drive off. At this point, the thought is difficult to shake. At least we couldn’t. After a brief exchange of emotions we quickly decided – let’s move to the other side of the parking site. A bit of a nuisance at this time of day, but better than getting no sleep at all. So we started securing the loose things so nothing would fall down during this maneuver. Then, the story took and absurd turn, a bit like in Grasse, but just a bit more extreme.

“OK, must be our other side neighbor, maybe we’re too loud or something.”, was my first thought. We open the door and a man starts talking to us in English, quite loud. We’re thinking it’s the neighbor and explain our situation. But soon we realize it’s some random guy who just arrived with his car, parked on the other side of the parking. He sort of jumps on our story and starts talking about fear and overcoming it and we start wondering what the hell’s going on. He mumbles something and goes back to his car, and my friend just says “I don’t want to talk to his guy.”. 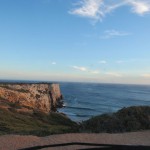 I’m a bit slow with my decision and all of a sudden, I’m by myself with my new friend, at about 3 am at night. He keeps talking about fear and I should be a man and accept the situation. But he also talks about Portugal and surfing and seems ok for a second. I kinda wanna lose him, and then he asks whether he can come into our camper. Sure thing! Let’s pull out some philosophy in the middle of the night while we actually just wanted to move our camper to the other side of the parking. Been waiting on that the whole day. I told him straight: “look man, we wanna sleep and this is it, see you tomorrow.”. He mumbled something about coming to his car and he then walked off.
I took the chance to climb back into the camper. What in the world is going on here? This is usually how horror movies start. Thought this is creepy? Now comes the really creepy part. We watch him and he starts his car. It seem he’s driving off for a second, but he parks sort of right behind us, and in a way, blocks us! My intuitive first though is: if you’re pulling something on us, I’m gonna back up like there’s no tomorrow ram your fucking car over the cliff, if necessary. The guy jumps out and walks towards our camper!

I hesitate for a second, then open the side window and just tell him again to just leave us alone. He mumbles something, says something like “I’m a Portuguese man…not doing anything…have a nice journey!”. He walks off, the Portuguese man…on some sort of drugs, I suppose. 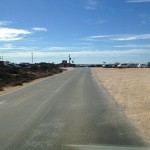 We laughed so hard after he was gone. What a bizzare encounter! I actually think he was harmless, but certainly a bit crazy or on drugs. And he behaved so strangely that one could only think what we thought. I also think I was giving away a bit too much information too early, but I was always on alert when talking to him. And the situation overcame us so quickly, we were just reacting. We moved the camper and had a good sleep for the rest of the night.

Not a fountain, but walls of creativity in LisboaReview: Camping Turiscampo