Space oddity meets a surf board in Peniche 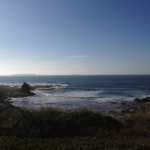 Peniche is a very pleasant but also odd place. It’s a wild mix of an old village, new tourist buildings, a very vivid surf scene and industrial zones. It seems it has expanded over time at free will and without a real concept for the city. But very likeable nonetheless. The air temperatures are always a few degrees lower than in other places in that area. I’m not sure why but maybe because it looks like sort of a semi-island. 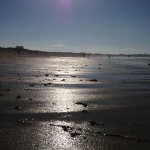 Although “regular” tourists visit as well, the major focus lies on surfing. It is one of Portugal’s prime surf spots, featuring very consistent waves all year round which attracts a corresponding crowd and scene. Many surf schools and shops are located in Peniche or in the surrounding villages Ferrel and Baleal.

So…while at this prime location – after getting my surfing feet wet in Zarautz, I decided to give it another go. The strategy was also to be on the lookout for a used board of at least 7 feet length as we’d be heading to many other surf locations. Renting a board in everywhere can quickly become as expensive as buying one. In addition to that, you’re bound to some time limit and you end up with a different board every time. In my case, I’m not really yet sure if I like surfing, but from a business decision standpoint, it makes sense to buy & try and possibly sell later than to rent. 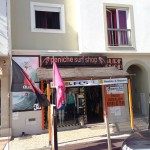 We started asking around. In a surf shop & school called G3! the guy said to find a board we’re looking for is “a miracle this time of year”. Ok, whatever. At the surf school Escola de Surf the really friendly guys told us it would be difficult, but we should try 58 Surf in Baleal. Our next stop was Peniche Surf Shop. We started talking to the owner (Alexander, as we later found out) and he said “sure…I have a few boards, but they are located in my other shop in Ferrel.”. It sounded like he had what we were looking for! We decided to bike to Baleal and then further to Ferrel to check everything out.

58 is a really nice shop, they have lots of gear, clothes and new boards, and they actually did have used boards as well. However, these boards did not really fit our needs. So, on to Ferrel where we checked Peniche Surf Shop’s 2nd location. Alexander’s wife warmly welcomed us, and when we mentioned the boards she knew right away as Alexander phoned her before. Two boards made it onto the selection list and then the thinking started. Should we buy one? Both? Reserve them? Not buy and keep renting? It felt it became more than a business decision – after all, it was the first board I was maybe ever about to buy! We asked for some time and discussed the matter outside.

After weighing the pros and cons we decided to reserve one of the boards and went back in. A few moments later Alexander came through the door and was very happy to see us – immediately all four of us were lively talking about everything! We exchanged our opinions and laughed a lot as well. And again – we stuck with our decision to reserve and left the shop once more.

A mere minute passed and we were right back in the discussion. “It’s a good board, good price, good people. Let’s just buy it.” We went back in and proclaimed our decision with a big smile. They smiled as well and we again started talking about lots of things. Very friendly and warmhearted those two. If you want to buy surf & beach gear in Peniche, head to Peniche Surf Shop first!

A yeah right, wait, it’s a miracle to get a used board, right? Miracle of Christ, as a friend of mine used to say. Well, making miracles happen ;) Too bad the surf conditions turned on us that day, the water was basically flat, which rarely but still sometimes happens, even in Peniche. But now with wetsuits and a board we are the early champions of gear – we just need: waves! I’ll really look stupid if I end up not liking surfing. 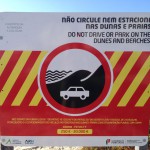 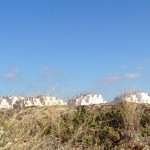 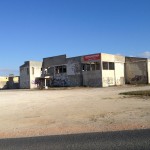 Review: Camping Peniche PraiaNot a fountain, but walls of creativity in Lisboa